Jeff Teague, Wiggins and Covington providing the support and faith beside the always working Towns, Rose and Gibson.

Their play has obviously won hearts with such passing, sportsmanship and use of the court. Their combination is, I would say, a killing one that can kill the likes of GSW and Lakers.

Their will to win is hardly matched by any team in this season. Being behind by more than 20 points in as many as 5 games, among them winning 4 and come close to winning in 1, shows what they want this season.

One stand out I would speak of is Derrick Rose. The aging lion has found his feet again. Passing with precision, dribbling like a walk in the park and scoring at will. This Rose is reminiscent of the 2010 Rose that was doomed to be the greatest of all time. Since then he might have lost his charm and people may have forgot that 7 years old MVP. But his play this season have proved the saying, “A lion may not hunt, but he never forgets hunting.” 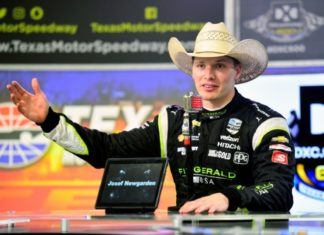 Eric Joseph - July 22, 2019
1
Josef Newgarden roared to his fourth conclusion of the season on Sunday, winning the weather-hit Iowa three...