Just a season later, they are struggling to call themselves a team. Last in the Western Conference table, the team looks far from the one that lost to the Champions in the Finals. And there’s just one man making the difference.

The might of LeBron James, or King James as he is lovingly called, has been the face changing factor. Scoring 27.2 pts per game, James guided the Cavaliers to the finals in the four years run. And to the Championship win in the 2016 season, winning the Most Valuable PlayerAward.

He single handedly guided the likes of A. Smith, Kevin Love and Jefferson to the final stage. Assisting, scoring and faking shots that looked beautiful and lethal at the same time, LeBron won the small region to their only major championship win in the last 42 years.

As James went to Lakers for doing something great again, Cleveland lost their gem and resource at the same time. No one in the current roster can fill the shoes of the great player. The current team lost 19 of the 24 games they’ve played till now. Signs of a fading glory I guess.

Maybe the team can get someone to manage their feet once again, but till then they are set to fade into oblivion soon; trying to not finish last. The hopes of playing the Finals for the fifth straight year is now all, but dusted.

They’ve rightly said, “Everything happens in the game.” And everything has happened for the Cavs.

God, give strength to the team. Literally and mentally. 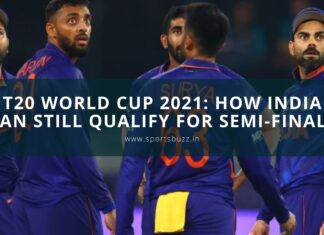 admin@sportsbuzz - November 2, 2021
0
The current scenario suggests that Team India is standing very close to the exit door. Kohli and Co. can still advance if they survive...