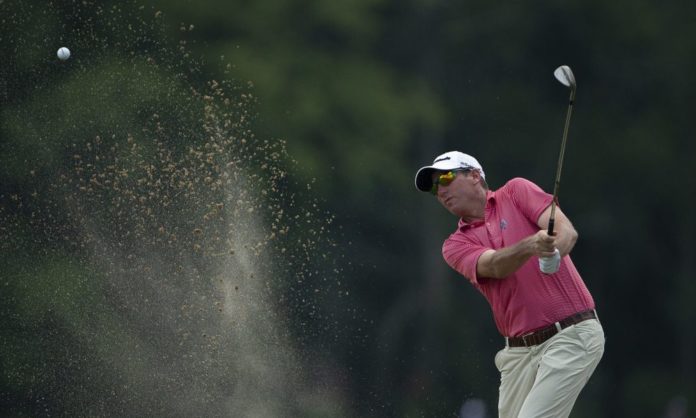 Jim Herman finally earned that elusive second PGA title of his career, winning the Barbasol Championship by one stroke over Kelly Kraft who stumbled to the finish with two bogeys down the stretch. Herman’s only other win on the PGA Tour came three years ago when he captured the Houston Open by one shot over Henrik Stenson of Sweden. Taking advantage of playing partner Kelly Kraft’s two late bogeys, and Herman finished with a 2-under 70 for a one-stroke victory at Keene Trace. A shot ahead with three to play, Kraft bogeyed the par-3 16th and par-4 17th in a closing 70. He rolled in three birdies and had one bogey on Sunday to finish with a 26-under 262 total on the Keene Trace Golf Club course in Nicholasville, Kentucky. Kraft was in contention on the back nine until he made back-to-back bogeys on 16 and 17 which left Herman needing just a par on the par-four 18 to take the title. Herman cooly landed his approach on the green then two putted for the victory.“ If you are not making birdies you are going to be chasing,” Herman said. “We just held off everyone else. It was just the two of us coming down stretch, he made a couple of mistakes.” Kraft shot a 70 while Austria’s Sepp Straka made a late charge but finished two shots back in sole third place after a six-under 66. Australia’s Matt Jones fired a 63 to finish in a tie for fourth with Austin Cook who had a 70. Herman is a former assistant pro at one of President Donald Trump’s golf courses in New Jersey. He says he played a round recently with the President and got some putting advice which he puts to good use.”He gets me going in the right direction with golf,” said Herman. “I took his advice and put a new putter in play.” Some might find it odd that a PGA Tour player would be taking advice from Trump, who has been accused of exaggerating his golf achievements and his claims to have won 18 club championships have also been widely challenged by a number of golf experts. But Herman said his ex employer inspires him“He aims me and puts me in a good spot,” Herman said.