Ben Stokes will retire from One Day International cricket after the India Vs England series.
The 31-year old has chosen to focus on the Tests and the Twenty20 format of the game. Declaring that it was unsustainable for him to play all three formats of cricket, he put his greatest focus towards playing test matches so that he could maintain his skills at both short and long forms of the sport.

Ben Stokes, Man of the Match in England’s 2019 World Cup fina for his all-round performance in England’s World Cup final win over New Zealand at Lord’s Stadium.
Stokes, who has made his debut in 2011 against Ireland, will be playing his last ODI at Lords Cricket ground. Even though he is 31 years old, Stokes is the second-youngest cricketer to play over 100 ODIs. He has scored 2,919 runs in his 104 appearances with an average of 39.44 and 74 wickets awarded under him.

The World Cup was definitely the highest point of Joe’s brief but illustrious career as far as cricket is concerned as he had helped England win it after a thrilling Super Over that went ahead because Jos Buttler had also played a big role in making it necessary (on this occasion) by hitting Ben Stokes for a boundary from long-on during the final itself!

“This has been an incredibly tough decision to make,” Stokes said in his statement. “I have loved every minute of playing with my mates for England. As hard as this decision was to come to, it’s not as hard as dealing with the fact I can’t give my teammates 100% of myself in this format any more. The England shirt deserves nothing less from anyone who wears it.

“Three formats are just unsustainable for me now. Not only do I feel that my body is letting me down because of the schedule and what is expected of us, but I also feel that I am taking the place of another player who can give Jos (Buttler) and the rest of the team their all.”

Stokes has struggled to play in all formats since the pandemic began in 2020. After hurting his finger in the 2021 IPL, Stokes took an indefinite break from cricket on July 31, meaning he didn’t play T20Is for almost 16 months, including the 2021 World Cup in the UAE. This decision probably means Stokes is clearing his path to be available for this year’s T20 World Cup in Australia. The last time Stokes had featured in a T20 World Cup he was hit for four consecutive sixes by West Indies’ Carlos Brathwaite in an epic final at Eden Gardens.

International Cricket Council’s Player of the Year in 2019, Wisden’s Leading Cricketer in the World in 2020 and 2021, Ben Stokes ranks seventh in ODI wickets for England since his debut, behind Adil Rashid, Chris Woakes, Steven Finn, Liam Plunkett and James Anderson. Since the start of 2019 World Cup however, Stokes has taken only 11 wickets in 20 games in ODIs.

“I will give everything I have to Test cricket, and now, with this decision, I feel I can also give my total commitment to the T20 format,” said Stokes

“I have loved all 104 games I have played so far, I’ve got one more, and it feels amazing to be playing my last game at my home ground in Durham. As always, the England fans have always been there for me and will continue to be there. You’re the best fans in the world. I hope we can win on Tuesday and set the series up nicely against South Africa.” Ben Stokes Said. 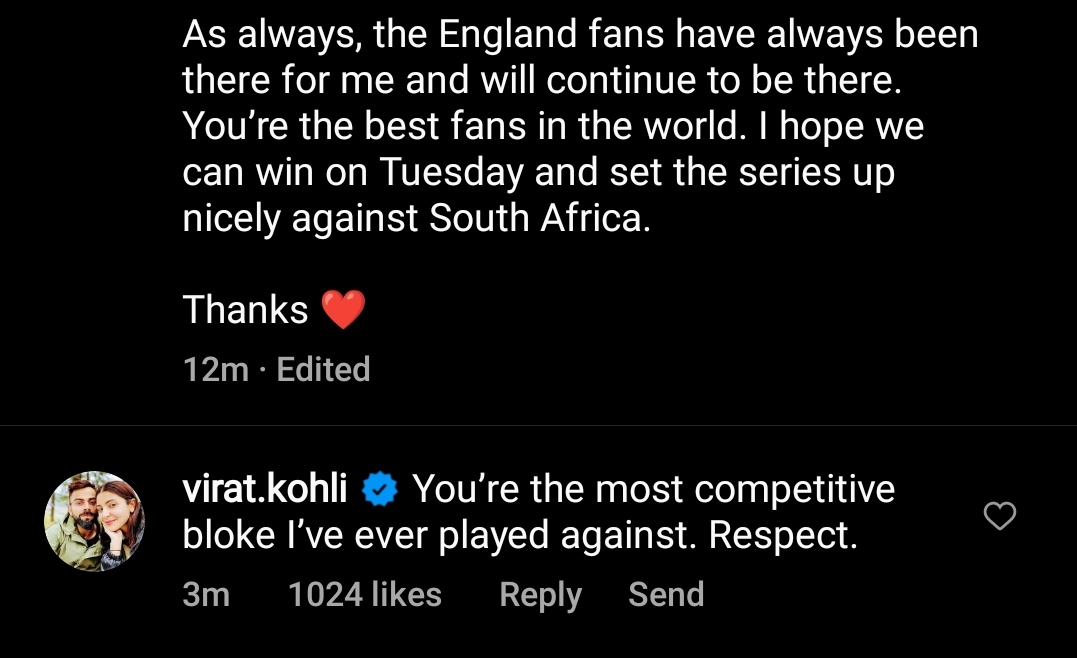