The last pay-per-view event of WWE is scheduled to be held on 16th December in San Jose, California. WWE TLC is annual event of the WWE where table, chairs and ladders can legally be used by the wrestler to their advantage. With a very good story line for many of the matches this could be potentially become one the better WWE events this year. WWE TLC kickoff show will start at 6p.m ET  while the main draw will start from 7p.m. ET.

1. Daniel Brayan vsAJ Styles: Undoubtedly this has to be the first match in our list of top 5 matches to watch out for at this year’s event. Both the WWE superstars will be seen fighting for the prestigious WWE championship match at the WWE TLC 2018 event.The match was announced in SmackDown Live Survivor serious. This is going to bere match for AJ Styles.

2. Seth Rollins vs Dean Ambrose: Second inour list of top 5 matches to Watch out for is the fight for WWEIntercontinental Championship.Afterthe departure of Roman from The Shield, it was evident that there is going tobe a twist in the shield storyline and rightly so happened. In the Survivorseries Ambrose turned on to Rollins after winning the Raw tag team championshipbelt. Both of them would be fighting for the Intercontinental Championship.

3. Ronda Rousey vsNia Jax: – Only woman’s match that made it to the list of top 5 matches towatch out for at this year’s event is this one.Ronda would be seen defendingher title at WWE TLC event against Nia Jax. Nia Jax after winning the battleroyal got her chance take a shot at the Raw’s Woman Championship title. Rouseyhas said that after this match she would revisit her rivalry with CharlotteFlair.

4. Braun Strowman vsBaron Corbin: This is going to be a TLC match. Braun was able to struck adeal with WWE commissioner Stephanie and got the match. This match has twostipulation, one that if Corbin losses at the WWE TLC  2018 match then Braun wouldface Lesner at the Royal Rumble event for the title and second if Corbin wins,he can become the General Manager of Raw.

5. Smack Down Tag team Championship: This the fifth match in our list our list of top 5 matches to watch out for at the WWE TLC 2018 event this year. This match is surely to be one of the entreating matches with The Bar , The Usos, and the New Day competing for the tittle. 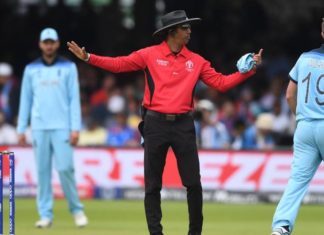 Eric Joseph - July 23, 2019
1
The umpire World Health Organization awarded England six runs from a freak overthrow within the last over of the planet final has...